Tai Ping was founded in British Hong Kong in 1956 by brothers Lawrence and Horace Kadoorie and a group of international friends with the noble aims of developing industry and providing employment to migrant workers. While a small textile presence existed in the colony before Tai Ping, it was entrepreneurial Chinese refugees who modernised the industry with advanced equipment and expertise. 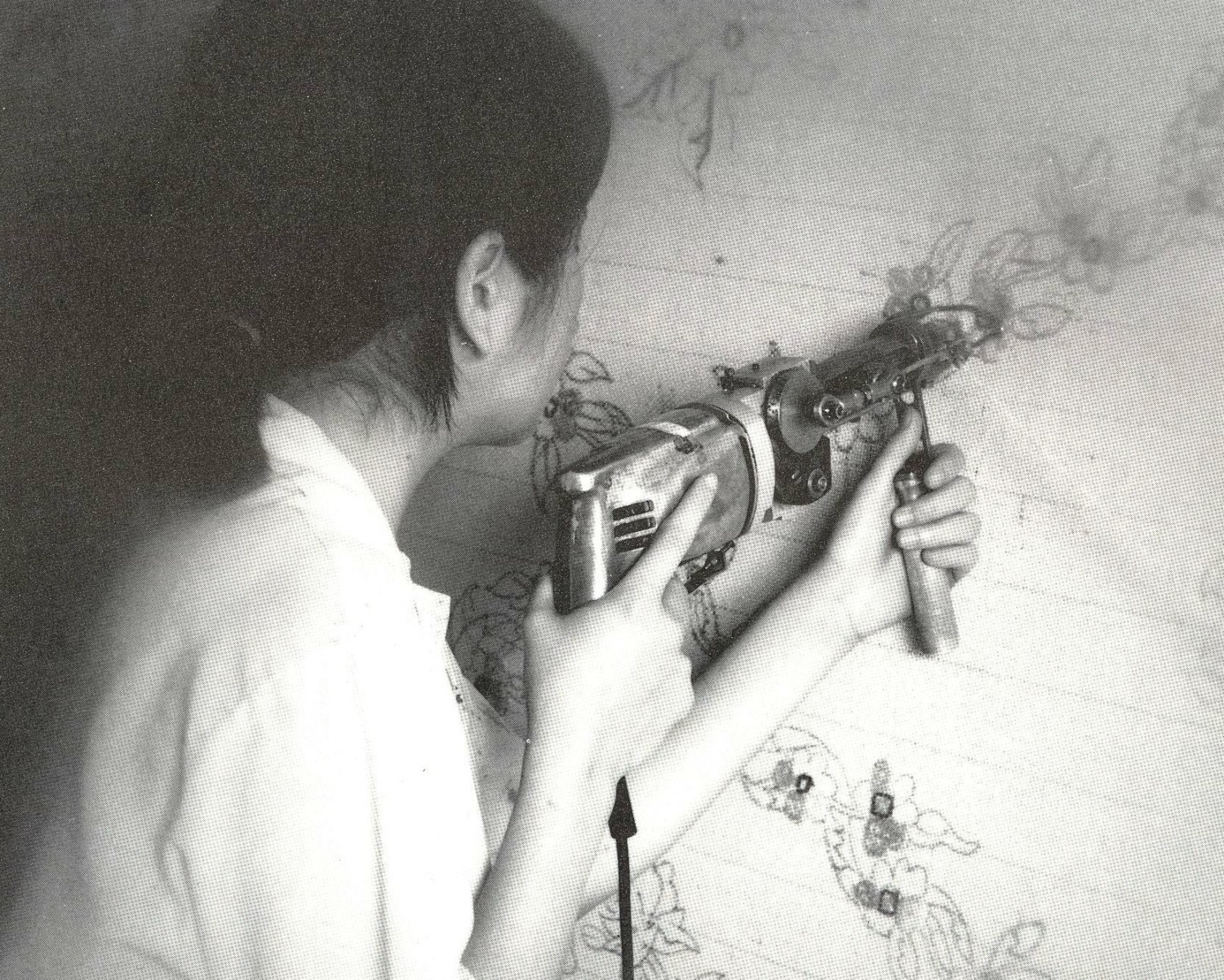 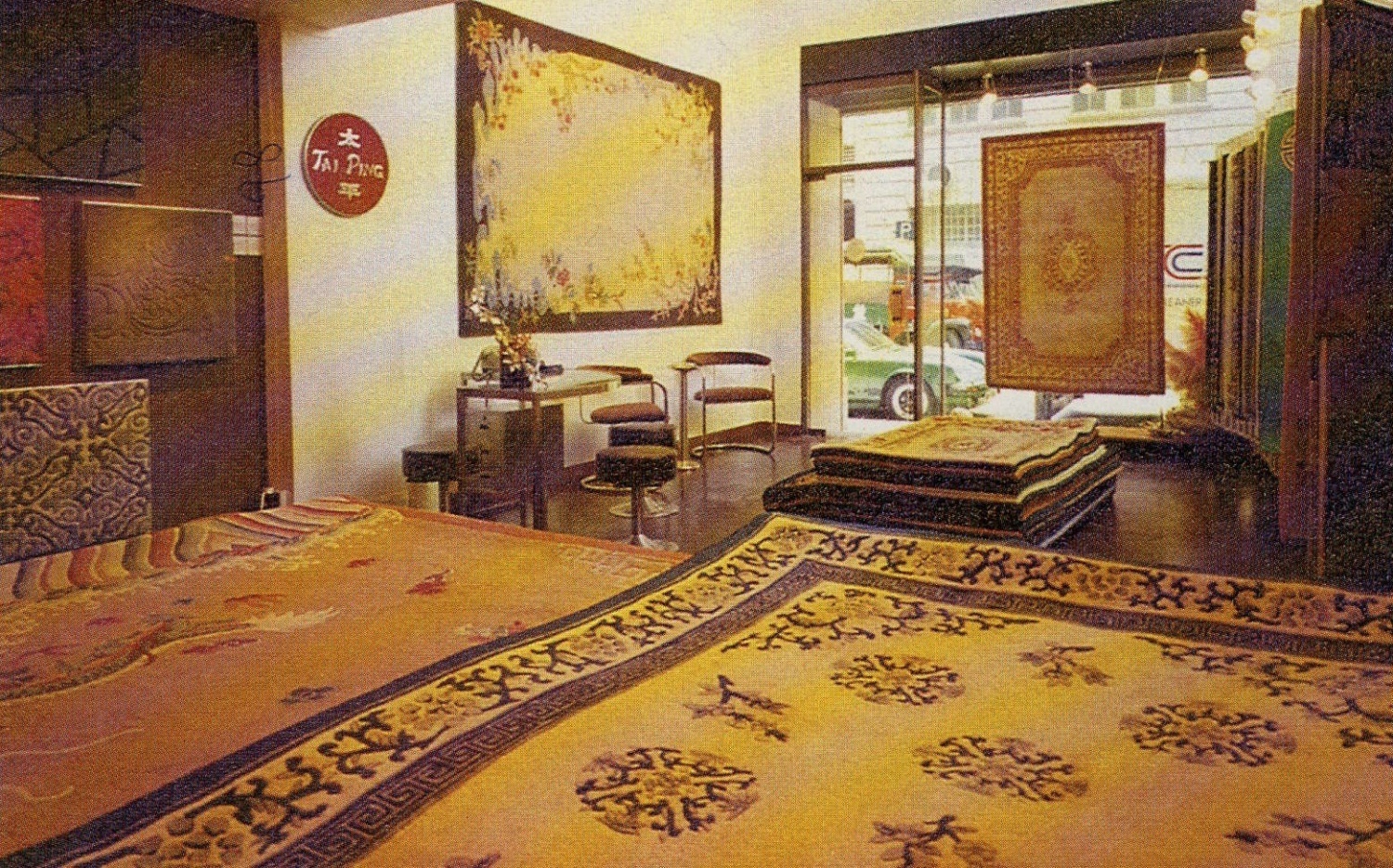 During this time, many international companies were setting up operations in Hong Kong, so it’s fitting that Tai Ping’s founding Board reflected the colony’s most prominent immigrant communities – Chinese, European and American – with the Kadoorie brothers acting as a bridge between them.

A humble 2-storey villa was the original home of Tai Ping, but a purpose-built factory soon followed as demand increased from around the world.

For more than six decades, Tai Ping has celebrated the philanthropic values of its founders by upholding a tradition of compassion for employees and community.

The story of Tai Ping is not only that of an individual company, but it also reflects the extraordinary changes and development of Hong Kong and the Asia-Pacific region since the Second World War, and in particular of course the dramatic rise of China from the latter part of the twentieth century.

In 1956, Hong Kong had only just recovered from the trauma of the Japanese occupation of 1941-45. The population was surging due to immigration and industrialisation was starting to take off.

Tai Ping was born out of the influx of labour from China and the need to create jobs for the rapidly increasing population. In this way, it was a leader in Hong Kong’s industrialisation process which developed such momentum from the early 1960s. Its Tai Po factory was one of the first industries in the otherwise rural New Territories, providing much-needed employment in the area.

In 1958, Tai Ping was developing an international reputation for its designs and craftsmanship. So much so, they caught the attention of elite American clientele, including the iconic Grauman’s Chinese Theater in Hollywood, California. Famous for immortalising movie stars in cement handprints in the nearby sidewalk, the iconic theatre’s carpet order was the company’s most prestigious to date, but it was so big it didn’t fit within Tai Ping’s modest workshop.

With insufficient space to make the company's largest order to date, workers created a temporary workshop over an adjacent tennis court, covered by a tent that had been acquired from a bankrupt circus.

When the carpet was almost finished, a designer visiting from the U.S. inspected and approved it before rushing off to the airport to catch the last plane before the ferocious Typhoon Ida struck Hong Kong and all flights were suspended. As the intensity of the storm increased, wind strength doubled and the tent collapsed. The entire carpet was almost ruined, but resourceful workers were able to support it on trestles above the soaked ground and they continued to work on the finishing touches from underneath. Workers braved the typhoon to secure the tent until the storm passed.

The carpet was saved and delivered on schedule with much acclaim. A wealth of prestigious orders soon followed and the legend of the Tai Ping tent was born.

In 2004, some 46 years after the Grauman's Chinese Theater carpet ws delivered, the Tai Ping logo was redesigned to incorporate the tent as an everlasting symbol of the company’s resilience and its commitment to customer service. 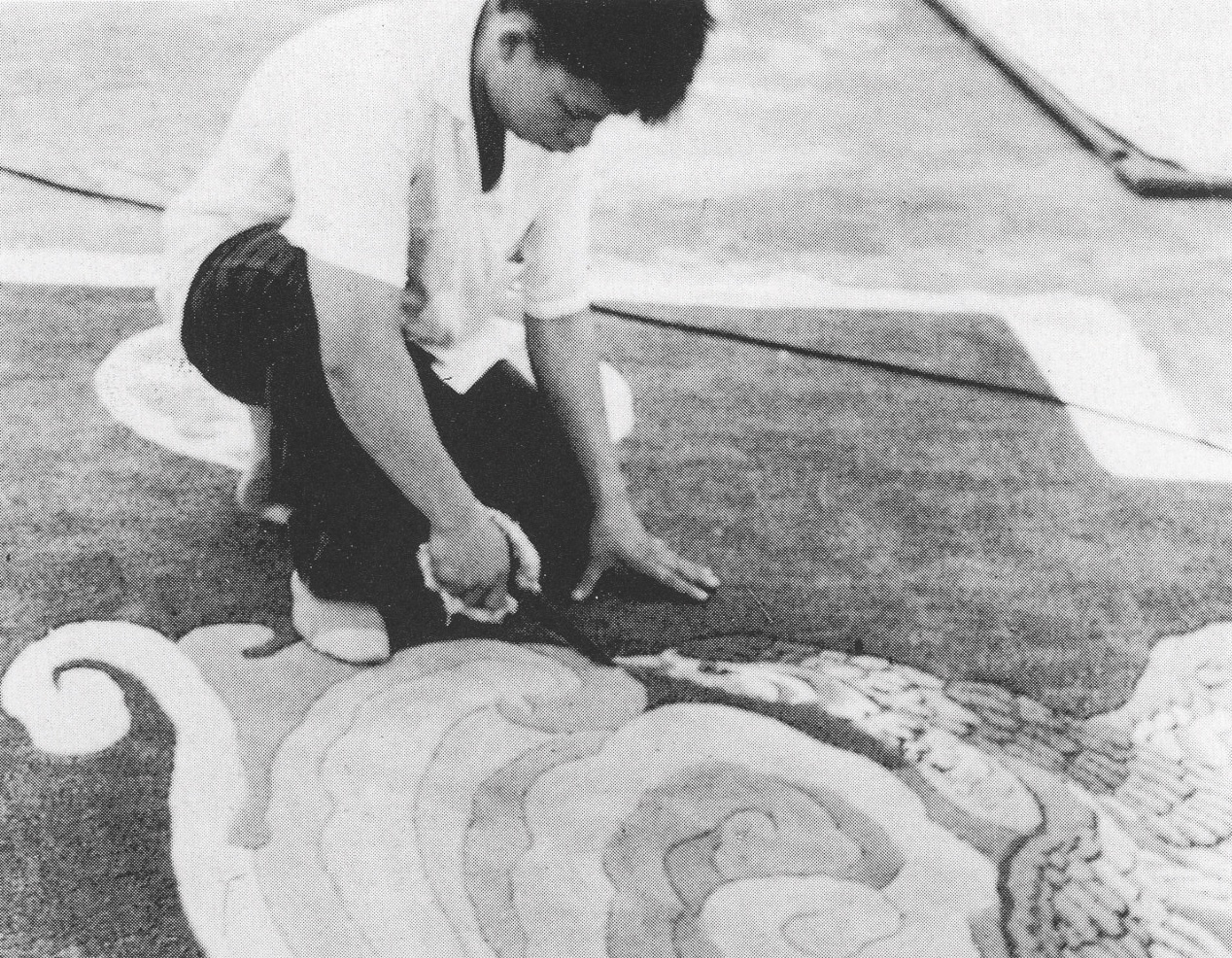 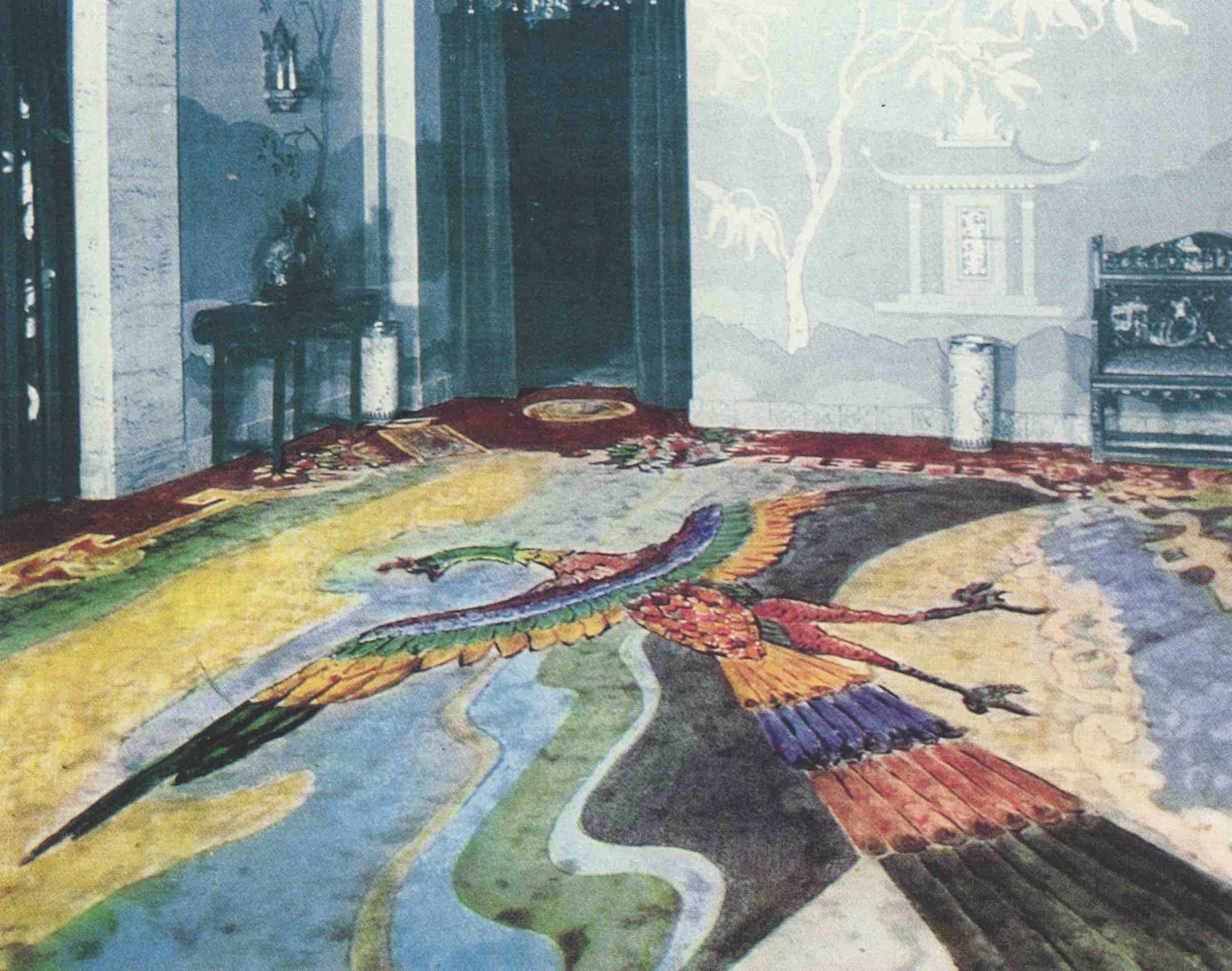 Tai Ping rapidly established a unique position and reputation globally in the carpet world as a leader in quality and workmanship, becoming the supplier of choice even for presidents and royalty, including Buckingham Palace, Windsor Castle, the White House, Élysée Palace, the King of Thailand and the Sultan of Brunei.

The throne room at Buckingham Palace has a wall-to-wall red carpet made by Tai Ping, and in 1961 a 6.7x12.2-metre (40x22-foot) rug was commissioned for the White Drawing Room in Windsor Castle. Tai Ping learned that the Queen was so delighted with the rug that she delayed the return of furniture by several days so she could enjoy its full design and share it with friends. She was also pleased to learn that the rug had been made in the British colony of Hong Kong using New Zealand and Scottish wools.

Cheung Yuen Villa
Here the original knotting looms were installed when Tai Ping was founded in 1956.

The Founders
Tai Ping, meaning "Peace", was established in 1956 by a group of seven Hong Kong businessmen led by Lord Lawrence Kadoorie and his brother Horace Kadoorie. The company aimed to provide employment for migrant artisans and the city's burgeoning post-war population to produce high quality handcrafted carpets.

The Kadoorie Family
Elly Kadoorie with his sons, Horace and Lawrence.

Workers in 1957
from its earliest years, the company was known for its fair treatment of staff and wide-ranging employee benefits. In an era when worker exploitation was common, Tai Ping offered a different kind of environment as described in one of its early promotional leaflets.

The Tufting Needle
The handheld, manually-operated needle was the first production tool used at Tai Ping.

VIP Guests
In addition to hosting VIP guests, Tai Ping's artisan workshop was frequently visited by locals and tourists who would arrive on tour buses.

Early Advertising
One of Tai Ping's earliest advertisement: the company was featured in the Hong Kong Government Annual Report in 1957.

The Legend of the Tent
The Grauman's Chinese Theatre carpet had to be constructed in a tent erected outside the factory. When Typhoon Ida swept through Hong Kong in the summer of 1958, the legend of the Tai Ping Tent was born.

The First Showroom
Tai Ping opened its first showroom in 1958, next to The Peninsula Hong Kong, marking the beginning of a long relationship with luxury hotels.

Tai Po Factory Opening
Ribbon-cutting ceremony at the opening of the new 5-storey factory building at Tai Po on the 11th of October, 1958.

Tai Ping in Windsor Castle
Tai Ping replicated a 110-year-old Beauvais carpet for the White Drawing Room at Windsor Castle. Her Majesty the Queen was so enthusiastic about it that she kept the room free of furniture for several days to show the carpet to her friends.

Overseas Exhibitions
Demonstrations of the art of carpet making at overseas fairs and exhibitions expanded Tai Ping's profile around the world. Shown here is Tai Ping's display stand at the Frankfurt Spring Fair in March 1968.

Magic Carpet Advertisement
Captioned 'Even the Magic Carpet could not beautify the many places that Tai Ping has', this Tai Ping advertisement was published in the 1960s.

Nanhai Factory
The Tai Po factory in Hong Kong closed in 1992 and all of its operations were transferred to a new facility in Nanhai, Guangdong Province, Southern China.

The Tent
In 2004, journalist, entrepreneur and magazine publisher Tyler Brûlé led the team to create a new visual identity for the brand - the Tai Ping Tent.

Edward Fields Carpet Makers
Edward Fields joined the House of Tai Ping in 2005, and soon after its newly-designed flagship showroom in New York City was reopened.

Shanghai Showroom
With success made in the overseas markets, Tai Ping returned to its root upon opening its first showroom in Shanghai (Yu Yuan Lu) in 2014, designed by Ramy Fischler.

Xiamen Artisan Workshop
The Xiamen artisan workshop was officially opened on the 16th of May, 2018. Designed by Paris-based Sandrolini Architecture, this state-of-the-art facility features environmentally-friendly elements that minimise energy consumption and maximise the use of natural light and ventilation.

An Artisan Tradition Since 1956 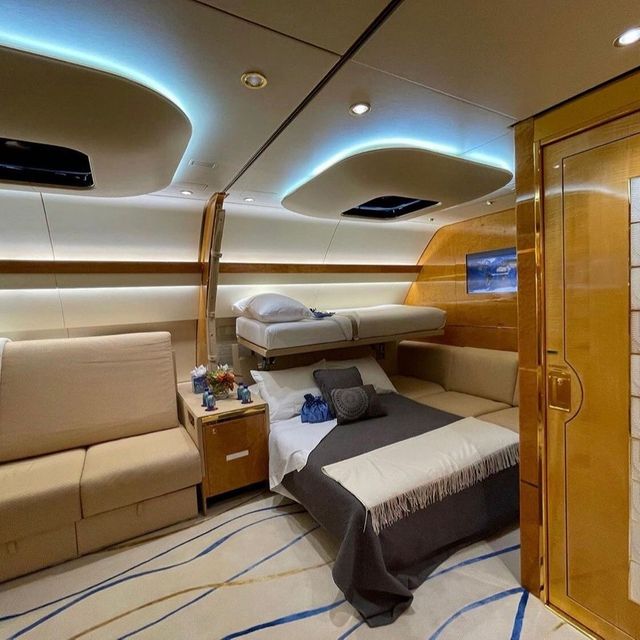 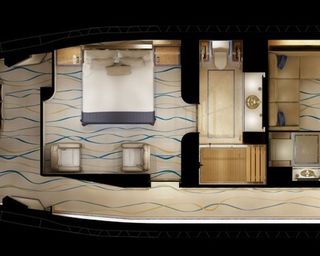 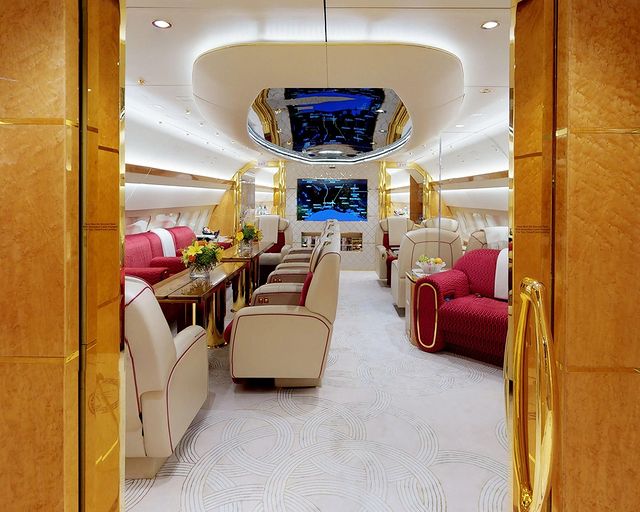 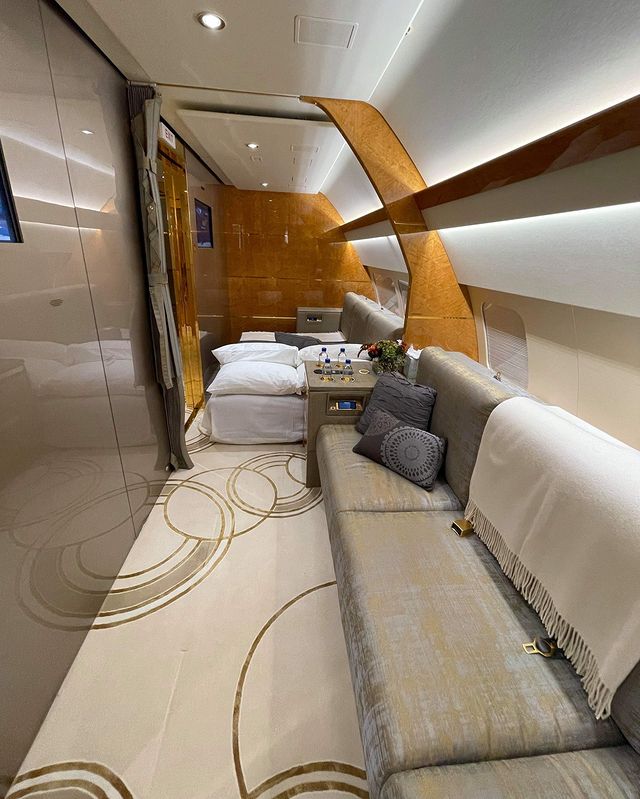 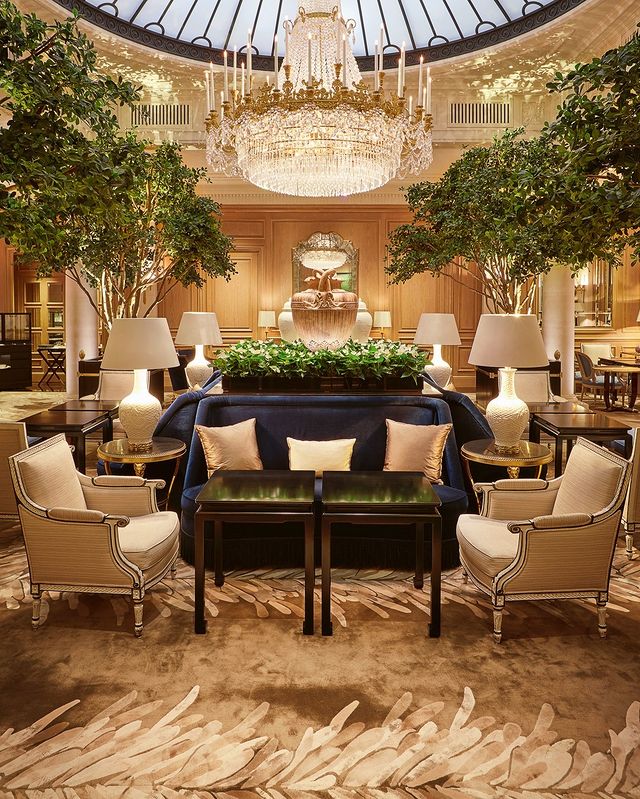 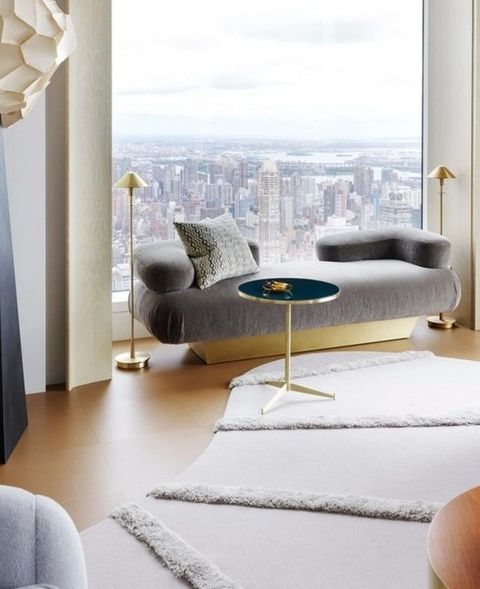 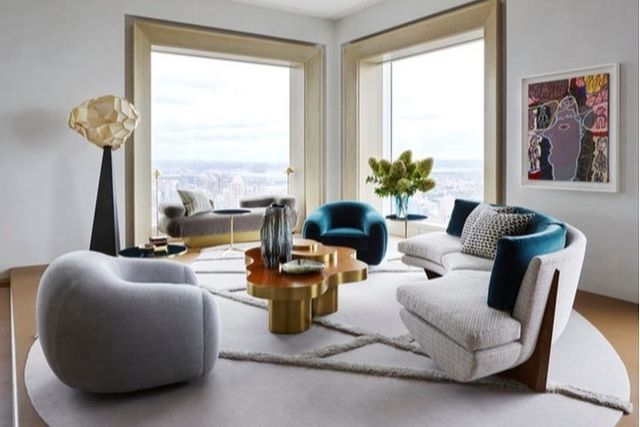 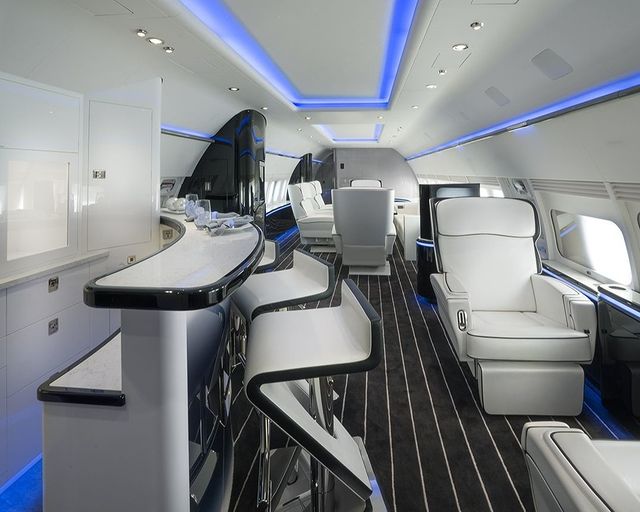 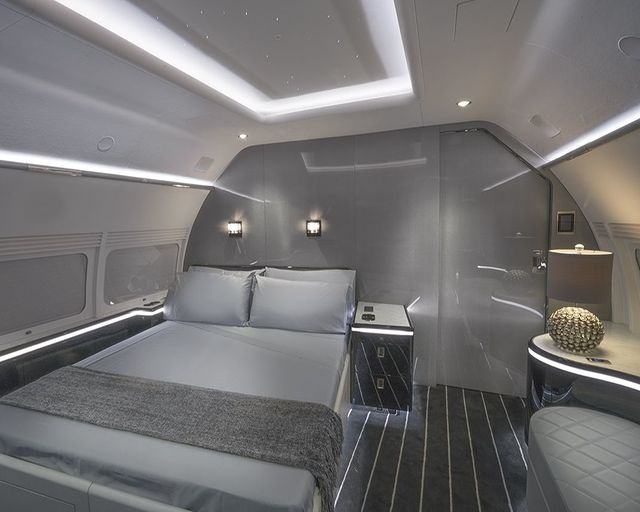 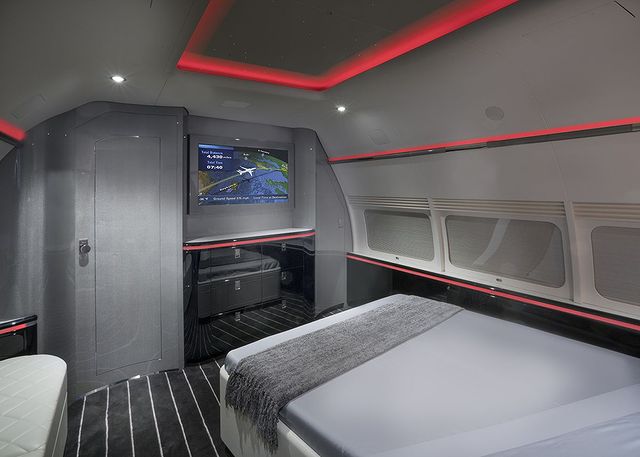 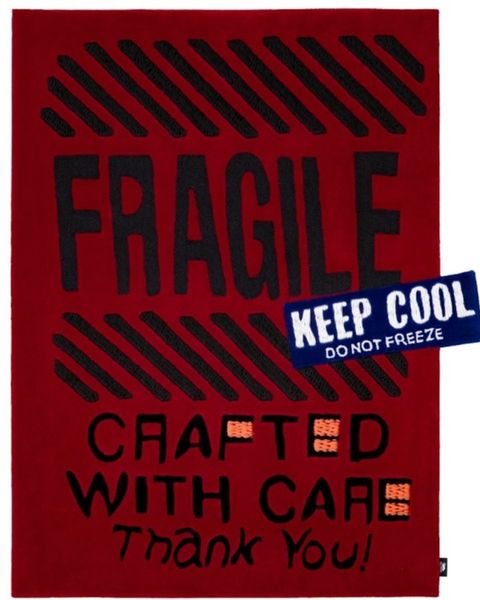 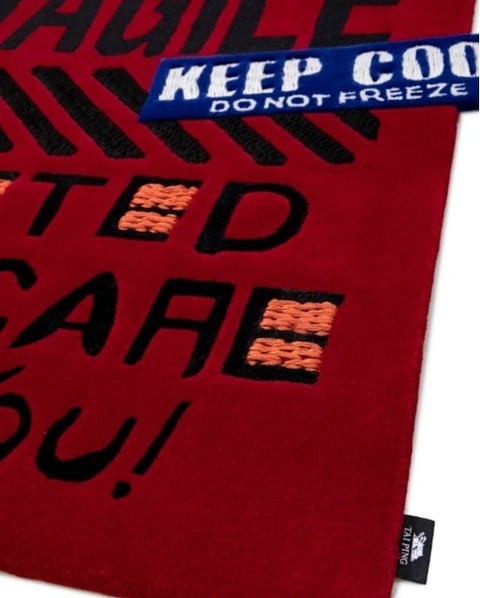 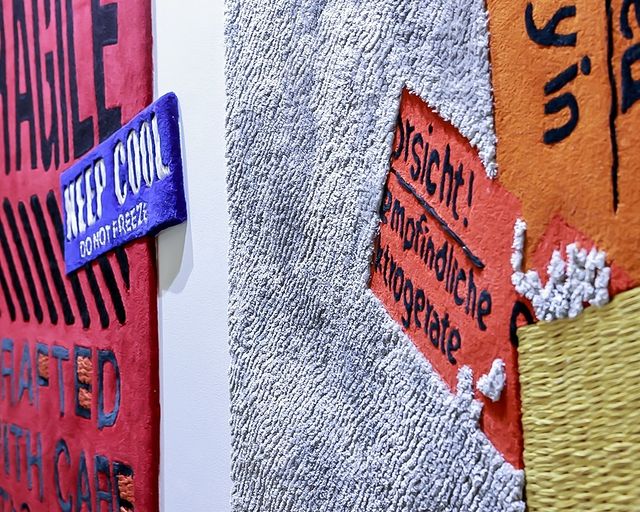 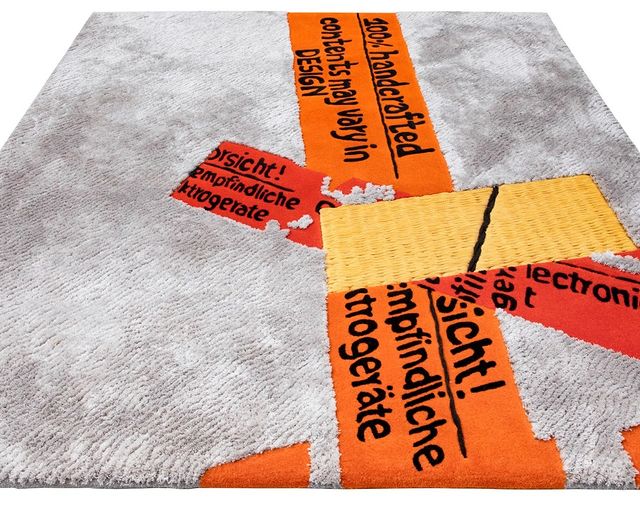 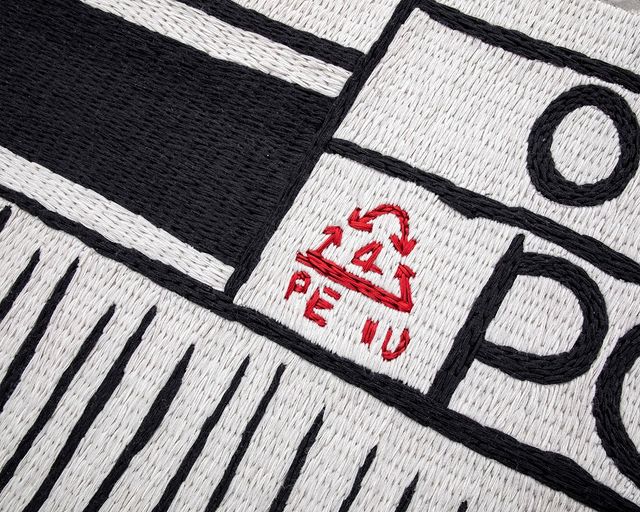 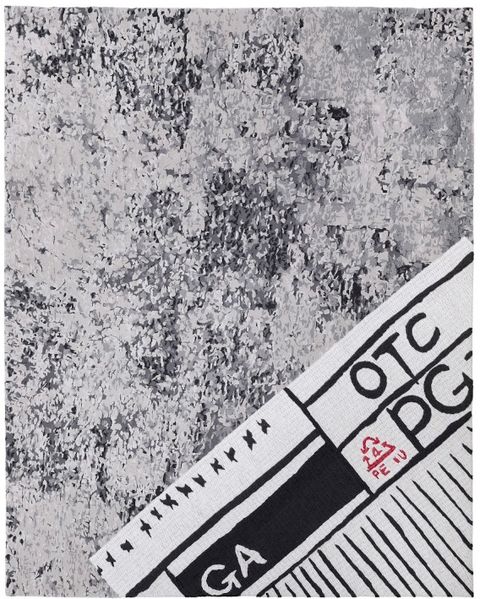 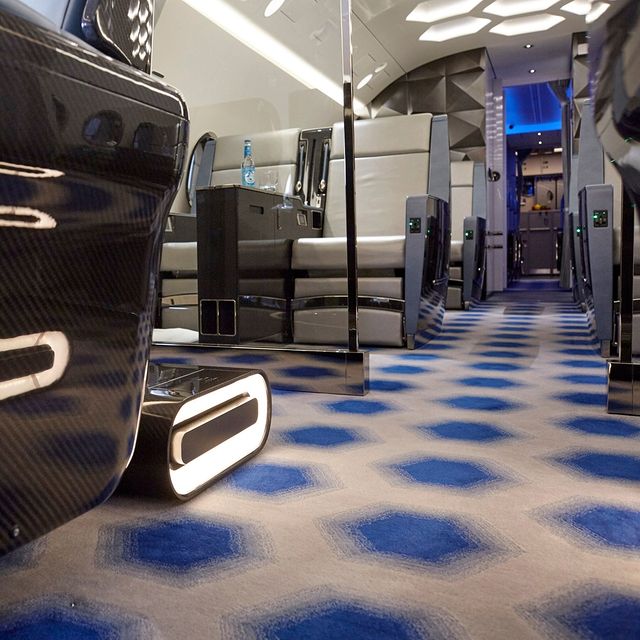